Solutions for the R&D of lithium-ion (Li) secondary batteries

Introduced in the 1990s, Lithium-ion (Li-ion) dethroned the NiCad battery (NiCd) as one of the fastest-growing and most widely used rechargeable batteries for portable electronics such as smartphones, laptops, tablets, game consoles, cordless drills, and more recently, even electric vehicles. While the Li-ion battery presented desirable properties including high-energy density, working voltage, tiny memory effect and quick charging, its degradation of battery performance and associated stability and safety risks continue to raise concerns. In view of these challenges, battery manufacturers can resort to an array of Waters’ systemic solutions such as accelerated degradation tests in addition to the analysis of the degradation mechanisms, in particular, the electrolyte solution. 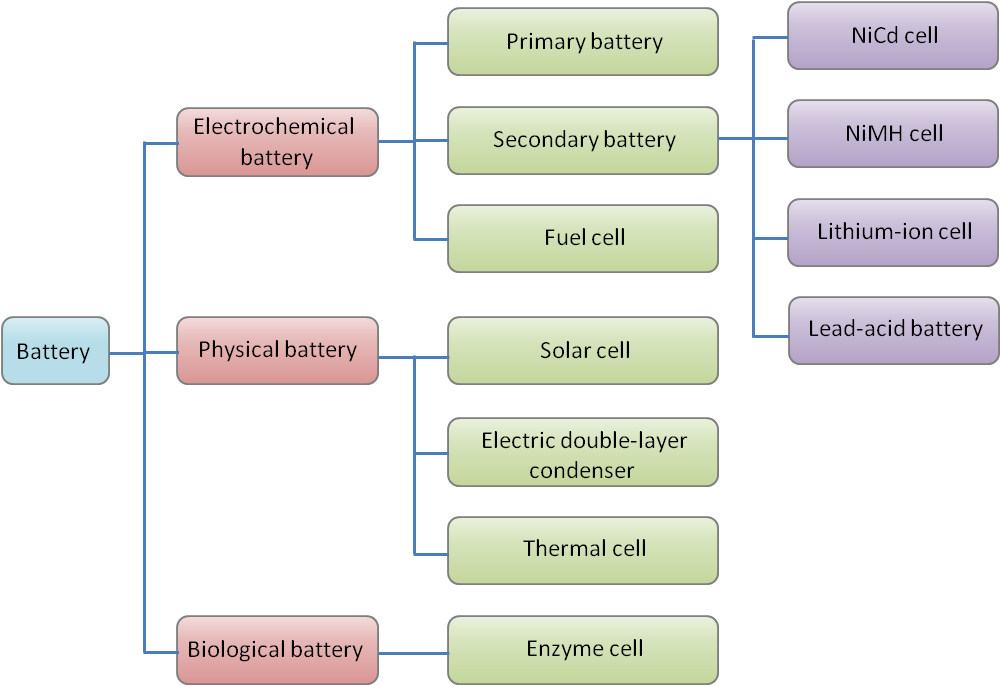 Batteries are classified into the three categories:
1. Electrochemical cells that are commonly used therein;
2. Physical cells, such as solar cells, that directly convert light energy into electrical energy in a semiconductor; and
3. Biological cells, including enzyme cells, that use enzymes or microorganisms

The lead-acid battery, a secondary battery type that has been used for almost 100 years, is widely employed in a variety of purposes, such as for cars and in uninterruptible power supplies (UPS). The lead-acid battery is extremely low cost per electric capacity compared to any other secondary battery and allows for large-scale electrical discharge. In contrast, it has several weak points, such as the need for a large space for installation (a large body size), heavy weight, and poor performance regarding low-temperature properties.

Compared to the NiMH and Li-ion secondary battery, NiCd batteries are not widely used due to their heavy weight per capacity and memory effect issues. The Li-ion battery, introduced in the 1990s quickly gained acceptance as a solution for the fast growing numbers of cellphones and laptop PCs, as it was considered superior in charge capacity per weight. In addition, as a feature of Li-ion batteries, a number of small discharge/recharge cycles do not reduce the discharged capacity (memory effect), and repeated recharging is available. 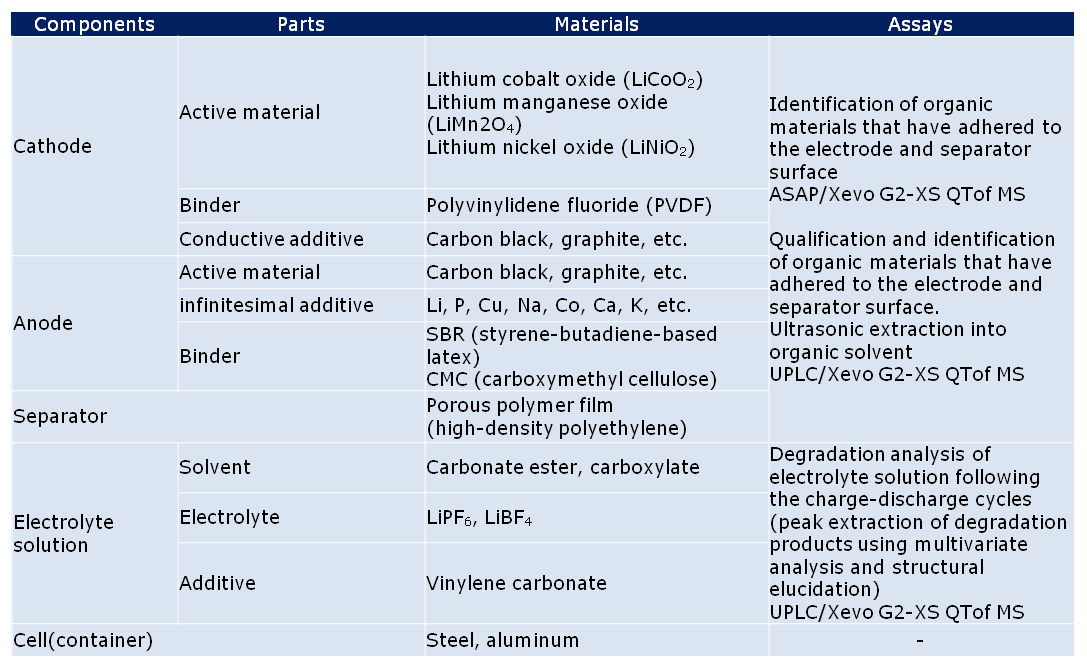 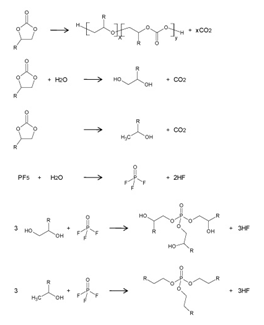 Accelerated degradation test and an analysis of degradation mechanisms
An analysis of variation factors is required in some studies, including the performance variability and stability assessment of new materials and substances. Information from the structural analysis of impurities in a degradation sample can elucidate the deterioration process, such as in the degradation of the major component and polymerization, and can be a criterion for the selection of effective additives for stabilization. Multivariate analysis using the Progenesis QI (OPLS model) is effective for comparative analysis between before- and after-degradation. It enables the ability to easily identify and isolate the differential factors from a large amount of information related to the components.

In workflow degradation mechanism analysis in the accelerated/aging study and in the degradation mechanism analysis, the samples in the pre- and post-accelerated deterioration are analyzed using a UPLC/time-of-flight mass spectrometer (n ≥ 3), and the comprehensively detected component information (retention time, accurate mass, and peak area) is automatically summarized in a table. The analysis of this component information with the OPLS model provides an S-Plot. Increased or decreased components between pre- and post-degradation are visually and easily extracted from this S-Plot, and each plot in the S-Plot corresponds to the components (peaks) identified based on accurate mass and retention time. The two plots with red markings indicate the components that show the largest change between pre- and post-degradation. Click these plots to show a trend plot, which allows you to confirm the increase or decrease of the component pre- and post-degradation. These two components appear to have some relationship, such as oxidation, reduction, degradation, and polymerization, during deterioration. 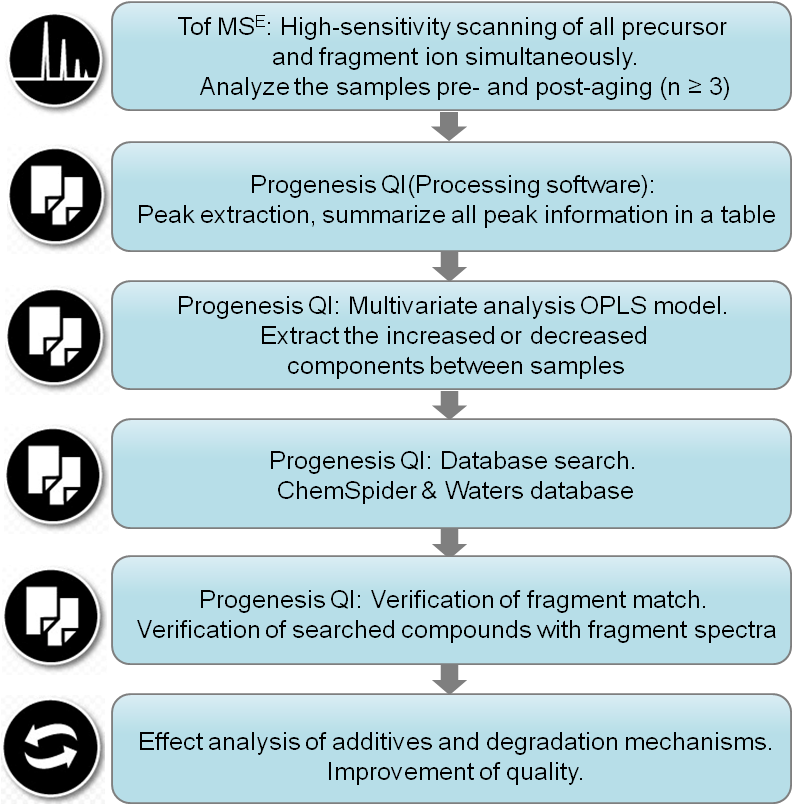 Systemic solution for the analysis of degradation mechanisms of electrolyte solution