Solutions for polymer characterization with novel technology of APGC

In the wake of complex regulatory considerations and stiff competition, polymer characterization has emerged as an indispensable solution to improve the quality standards of polymeric materials and speed product innovation. Polymer manufacturers’ adoption of cutting-edge Pyrolysis-Gas Chromatography Mass Spectrometry (Py-GC/MS) has significantly compressed processing time, and reduced the complexity of estimating the elemental composition and chemical structure of significant marker components to drive their analytical discovery and business success.

Pyrolysis-Gas Chromatography Mass Spectrometry (Py-GC/MS), for instance, is one of the methods to approach structural elucidation of polymer. It begins with a polymer sample being pyrolyzed at a temperature determined by Pyrolyzer before it is introduced into a capillary column. Pyrolyzed components are then separated through the capillary column, ionized and detected by MS. Data acquired on Py-GC/MS is used to facilitate the identification of polymeric composition of the sample.

For polymer pyrolysis behavior analysis, GC/Electron Ionization (EI)-Quadrupole-MS has proven a well-understood and commonly-used method. Conversely, a method such as Total Ion Chromatogram (TIC) acquired on Py-GC/EI-MS is extremely complex for data processing because various pyrolyzed materials are generated in the pyrolysis process. In addition, EI produces many fragmented ions rather than molecular related ions.

Atmospheric Pressure Gas Chromatography (APGC) coupled with QTof MS
APGC ionization is a “softer” technique under atmospheric pressure and has an alternative. The ionization is “soft” meaning that less fragmentation is observed for many compounds when compared with techniques such as EI.

Ionization in APGC is analogous to atmospheric pressure chemical ionization (APCI) insomuch as molecular or quasi-molecular ions are produced. Accordingly, regarding multivariate analysis, processing time including peak deconvolution can be significantly reduced by using the APGC data set. MSE acquisition mode on Waters QTof MS (Quadrupole-Time Of Flight MS) can obtain MS spectrum and fragment spectrum of all components in the sample at the same time. By using QTof MS in conjunction with the APGC ionization source and MSE data acquisition, it makes it easier to estimate elemental composition and chemical structures of important marker components even on GC analysis.

An example of comparative analysis of random and block copolymer behavior at pyrolysis
Acrylic acid-Styrene copolymer was analyzed on Pyrolyzer-GC/APGC-QTof (Fig.1), and markers with significant differences between these two samples were extracted by multivariate analysis (MVA) of Progenesis QI software and the structure of the compound was identified. 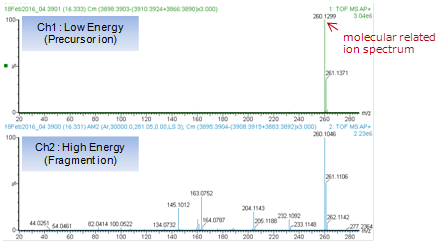 Structural elucidation and significant markers extraction
The functions and performance of polymer materials are determined by the structural differences of polymers such as the degree of polymerization and ratio of monomers. By means of polymer characterization, we can elucidate the structures of characteristic components for development of new materials. By conducting a MVA through Progenesis QI, significant differences among components in each sample can be easily highlighted and extracted as makers. In addition, elemental composition and structural elucidation of these markers can also be performed as shown in Fig. 3 and 4. Fig.3 Score and S-plot on block and random copolymer (OPLS-DA) 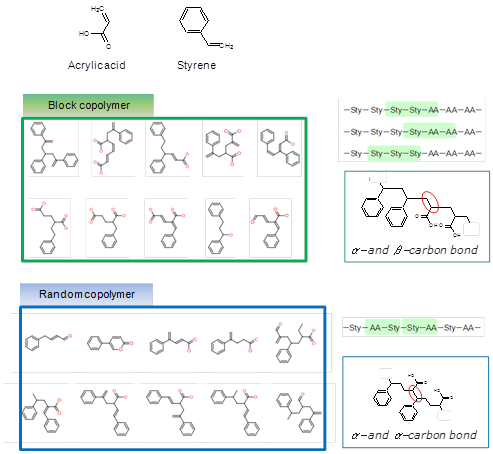 Fig. 5 Structure of identified markers peculiar to each copolymer